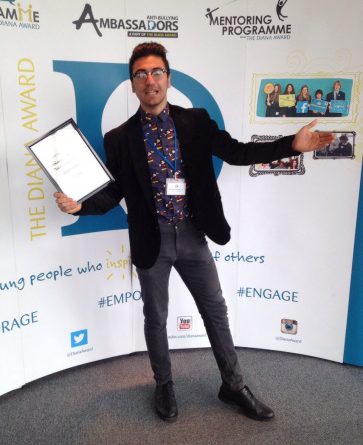 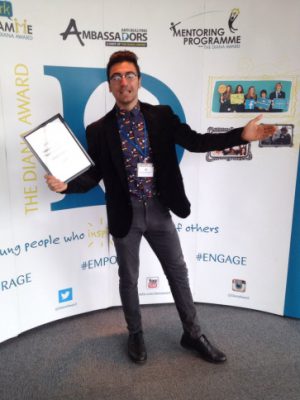 Westminster Academy is delighted to announce that Mohammed Abdul Jalil has been honoured with the Diana Award. The Diana Award, set up in memory of Princess Diana’s belief that young people have the power to change the world for the better, has Prime Minister David Cameron as Patron and the support of the HRH Duke of Cambridge and HRH Prince Harry.

Mohammed Abdul Jalil (AJ) received the Diana Award for being a Diana Champion Volunteer at Westminster Academy and the surrounding area.

As a Volunteer Police Cadet, AJ has been actively engaged in keeping communities safe for the past three years. He has also led younger cadets and has inspired them to have a positive impact on the local area. Additionally, AJ has supported older members of the community by volunteering with Open Age at Westminster Academy. As well as helping to organise events for the group, AJ has been involved in weekly sessions to help Open Age members with technology, giving them the confidence to use the internet and mobile phones.

Since 1999, the Diana Award has recognised over 44,000 young people who have made a positive difference to the lives of others and their communities.  The Diana Award believe that young people should be: encouraged for their contributions to society, empowered to reach their full potential and they should be engaged in social action as early in life as possible.

“At Westminster Academy we place high value on active citizenship, and as such are extremely proud of AJ. The Diana Award will encourage him to continue his volunteer work and will inspire other young people to volunteer in their schools and communities.”

“The Diana Award is proud to recognise young volunteers, like Mohammed, who have the confidence and courage to stand up for what they believe. The Diana Champion Volunteer Award is presented to inspirational young people who have made a positive difference in their communities. With a growing network of over 44,000 Award Holders, we are building a force of young people who are committed to take social action and improve our communities.”

AJ recently completed the International Baccalaureate Career-related Programme at Westminster Academy and is now pursuing his passion for media at Bournemouth University.