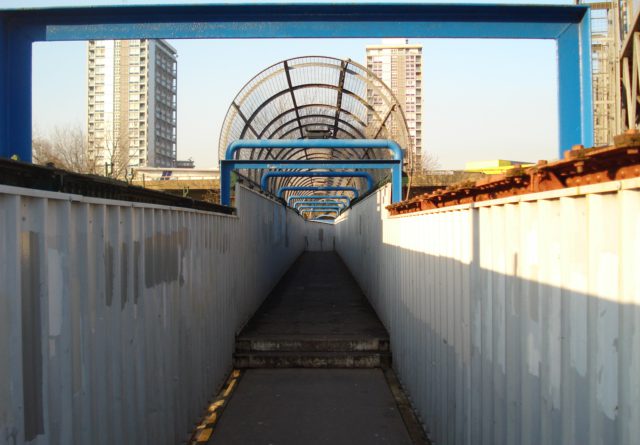 Anybody following the ongoing saga of the Westbourne Park Footbridge may be interested to know about a meeting of the Hampden Street Footbridge Subgroup of the Paddington Crossrail Liaison Panel to discuss it’s future, since the Connect2 lottery funding improvements were lost as a result of the uncertain design and schedule for electrification of the railway line under the footbridge.

This meeting included representatives from Crossrail, Network Rail and Westminster City Council, as well as Jason and Toby from the Westbourne Forum.

The good news is that we were shown plans for upgrades to the footbridge (in line with Crossrail’s obligations agreed by Parliament), which include a new step-free access route for wheelchairs and prams from Westbourne Park Villas in the south. Security issues are still being discussed with the local police to optimise such things as lighting for at least 5 CCTV cameras.

Unfortunately there is currently no budget, or plan, to ‘straighten out the kink’, due to the position of the bridge and also other railway hardware. There are also no plans to make pedestrians on the footbridge significantly more visible – so people could see who was on the bridge before starting out. As new electrification is going to be under the bridge, anything metal dropped through mesh could cause problems and due to the closeness of the signalling lights beside the footbridge, other lights on the bridge could distract or confuse train drivers.

However there is still a chance that these improvements could happen as the meeting was given the following undertaking:

“In line with their holistic approach to works, Network Rail to progress internal discussions, in regard to alignment of any other potential improvement works to the bridge, which could be delivered within the same four year funding period.”

Westbourne Forum would appreciate any comments or observations you have about the footbridge.