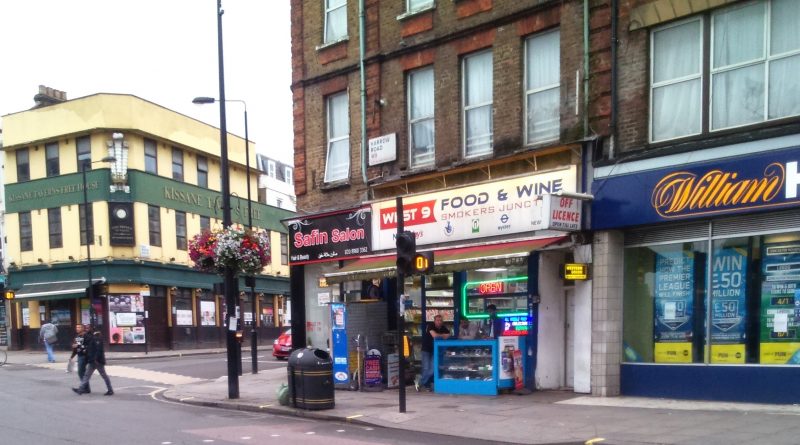 The Prince of Wales marks the north west corner of Westbourne Ward and it is currently boarded up while a fight rages about it’s future.

On the 1st July Betfred were refused a new gambling license for the Prince of Wales but it is believed they will appeal. Meanwhile they are also applying for planning permission for change of use to turn the public house into a betting office. At the time of writing, comments were still open, and there is also a petition: petitions.westminster.gov.uk/betfred/.

There is also an application for the rear of the property to increase the number of flats on the upper floors to six with ‘extensions at first and second floor and mansard roof extension’ and at the time of writing, the comments on this are still open.

Betfred, who have another shop a short walk down Harrow road, described their clients as ‘undesirable’ in the original hearing for a gambling license. Westbourne Forum and it’s neighbours, including Maida Hill Forum, strongly object to the Prince of Wales site having a gambling license or planning permission for a betting office.

Meanwhile, prompted by information that came from the Prince of Wales case, Westminster Council is currently reviewing the gambling license of William Hill (357 Harrow Road, W9 3NA). The consultation period expired on the 16th August 2015 and a Decision is Pending.

The Prince of Wales is not the only site undergoing development, as the grade two listed Harrow Road Police Station, will become 1, 2 and 3 bedroom ‘luxurious converted and new apartments’, which will be known as Westbourne Place when it opens in 2018.

Walking a little bit further one comes across the puzzle that is the Windsor Castle which has been vacant for a few years and was recently blocked up, possibly illegally. It’s not clear what it’s future could be, although it would be nice for it to stay a pub or at least something useful to the local community. There is more information in the Ham and High. Update: There is also more information on the Maida Hill website about the planning permission situation and the buildings new owners.

What was the Neeld Arms a little bit further down at 362 Harrow Road, next to another William Hill betting office, will soon become 5, or 6, new residential apartments. They have a sign for shop / restaurant to let on the ground floor which for many of the regulars will not replace the ‘sports bar’ atmosphere.

The North West corner of Westbourne is likely to look a little different soon.