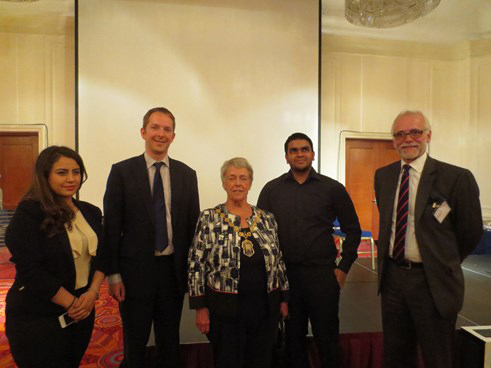 Congratulations to Matinur Rahman and Andrea Santi who have had their volunteering achievements recognised by Westminster County Council at the Community Awards 2014.

At the awards ceremony in Paddington, Andrea, Year 12, was awarded Highly Commended in the Young Volunteer Award for her volunteering including on the Westbourne Forum, where her work helps to improve community cohesion and communication between young people and adults.

Matinur, Year 12, was in the top two in Westminster for the Sir Simon Milton Award for young people who have made ‘an outstanding contribution to the community by working with older people or disadvantaged young people’. He achieved Highly Commended for his role leading on the partnership between Open Age and Westminster Academy. Matinur was heaped with praise by Open Age and Lisa Milton from the Sir Simon Milton Foundation. The Foundation was so impressed, that even though he didn’t win, they have offered to make a donation to Open Age as a result of being inspired by Matinur. Matinur was also offered congratulations by Westminster’s new Lord Mayor, Cllr Audrey Lewis, and Cllr Steve Summers, who also gave him some tips on entering a career in politics.

Westminster Academy was delighted to see our friends and partner organisations also earning Highly Commended in the following categories for their hard work with WA and the community:

Matinur said “It was a spectacular event and I was so proud to be there. I love volunteering with Open Age and am very thankful to them for supporting me.”