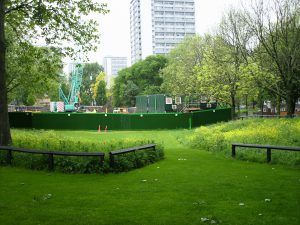 Residents will have noticed that Optimize, the contractors for Thames Water, have started work on Westbourne Green. The work site is now surrounded by a green hoarding, on which there is a phone number to ring if they are causing you a nuisance, or you have other concerns.

The site on the Green is where they are excavating a tank 20 metres in diameter and 20 metres deep, which will contain sewage whenever the sewers cannot cope. Once the tank is dug, a tunnel will then be bored northwards under the Green, and on under the Canal, to link up with the existing system at Formosa Street. This ( and similar works in Tamplin Mews Gardens and Chippenham Road ) is to alleviate flooding which was happening to houses in the vicinity of Formosa Street and along Shirland Road.

Thames Water hold a meeting with local people roughly every six weeks or so where they keep us informed and hear our concerns. This was a condition of their being granted planning permission, as was making a contribution of £40,000 to the improvement of the Green as part of the Westbourne Green Masterplan ( quite apart from reinstating it themselves after their work ), and providing activities for local people to replace opportunities lost by the Green being dug up this year and to mitigate the distress caused by their work.

Thames Water also promised to swiftly fill in and grass The Pit ( on the corner of Bourne Terrace and Harrow Road ) so that this adds to usable open space. Regrettably nothing seems to have been done about that at the time of writing. The regular meeting is our chance to keep Thames Water honest and make sure they are fulfilling their side of the deal. Normally Geoff Biggs, Fr.Henry Everett, and Lawrence Harrault are among those attending ( as well as councillors and other residents ) so if you have concerns, let us know.