Westminster Academy is celebrating outstanding results which put it among the top schools in the country for progress made, as published in the school performance tables. Almost 70% students are now achieving 5 A*-C grades at GCSE including English and maths – up from 17% when the Academy opened in 2007 – and the Academy is equally delighted that the progress made by individual students since joining the Academy is significantly above the national average. 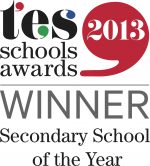 Among some of the outstanding GCSE or equivalent results in 2013 were those of Sarah Al-Saad, who achieved 5 A*, 5 As and 1 B as well as an A in her Arabic AS Level. Sarah is now applying her academic skills to the rigorous International Baccalaureate Diploma Programme at the Sixth Form at Westminster Academy, where in 2013, Westminster Academy students beat the IB world average for the third year running.

All Westminster Academy students gain university offers and to further inspire students, the Academy’s sponsors are offering three ‘Dangoor Challenge’ scholarships for the first three students to gain a university place at Oxford, Cambridge or Imperial College in August 2015.

Principal, Smita Bora, reminded the community that the exceptional progress made by students at the Academy was reflected in last year’s Outstanding Ofsted grading and the ‘golden year’ that followed. In 2013, the Academy was presented with three national awards: the IAA (Independent Academies Association) Honorary President’s Award for Academy Transformation, TES Secondary School of the Year and the Deputy Prime Minister’s Pupil Premium Award. In addition, Westminster Academy was the only school in Westminster to win a Mayor of London’s Gold Club award. Each accolade recognises the success of the Academy’s personalised curriculum and aspirational, inclusive vision to attain excellence for all students.